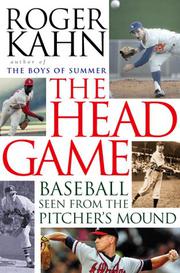 Baseball Seen from the Pitcher’s Mound

A hot-stove league ramble, well lubricated with fine wines, on the subject of pitching, by a baseball writer who has seen it all.

Kahn’s 1972 masterpiece The Boys of Summer is the finest baseball book ever written. This one falls considerably short, but it’s as warm and comforting as a twilight doubleheader crackling out of the car radio on a long summer road trip. Kahn (A Flame of Pure Fire, 1999, etc.) drifts through the history of pitching, from the 19th-century star “Ol’ Hoss” Radbourn to today’s Atlanta Braves—but unlike most baseball schmoozers, he has actually known most of the players of whom he speaks, and he seems to have gone for drinks with more than a few of them. The subject being baseball, much of the fun is in noting the inclusions and exclusions. One quickly realizes that the sketched biographies that structure the book are mostly of National Leaguers: Radbourn, Christy Mathewson, Warren Spahn, Johnny Sain, Don Drysdale, Bruce Sutter, Sandy Koufax, Bob Gibson, and Leo Mazzone get reverential treatment, while Cy Young, Walter Johnson, and the great Yankee, Indian, and Oriole staffs of the past 60 years get little more than a tip of the hat. Woven in with the mini-portraits is a pitch-by-pitch account of the trade, and the stories of the curve, the slider, the spitter, the brush-back, and the splitter drop into the narrative as gracefully as a big Dwight Gooden bender. The book only occasionally transcends its genre, though, and when it does it’s in familiar territory: there’s unquestionably an extra bit of hop to Kahn’s fastball when he goes back to the Dodgers and Giants of the 1950s and ’60s, and when the topic turns to Sal Maglie or Jackie Robinson or Sandy Koufax his prose gleams like the grass at Ebbets Field in October.

Opinionated, rambling, occasionally arbitrary, and always biased by its author’s roots—in other words, everything a baseball book should be.