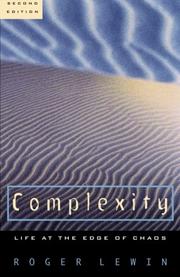 COMPLEXITY: Life at the Edge of Chaos

What happens when you take computer pros, AI folk, brain modelers, ecologists, evolutionists, biologists, and students of chaos, sprinkle them with enthusiasm, and kindle a search for order? Out may come complexity--touted as the ""new science of the nineties."" Lewin, who has demonstrated his talents as an expositor on evolution (Bones of Contention, 1987, etc.), has trekked from academia to rain forest to archaeological sites to take the measure of the new science in first-name interviews with principal players and critics. Central to the cast here is a group at the Santa Fe Institute, established in 1984 to bring a multidisciplinary approach to the study of complex systems. Here are computer models of cultural evolution, Boolean network of interacting genes, and other simulations that, lo and behold, generate the attractors, the cycling patterns, and the orderings associated with the nonlinear dynamic systems of chaos theory. In short, order out of chaos; order as an ""emergent"" feature of complex phenomena, be they ant, human, or the planetary ecosystem itself (shades of Gaia); even the ""emergence of an inexorable drive toward greater complexity...and an intelligence sufficiently powerful to contemplate it all."" Maybe, maybe not. Lewin sorts out the more modest claims from the mystical, and he adds the contempt of critics who decry the models as ""mathematically interesting but biologically trivial."" He also provides a neat chapter summarizing current views on consciousness (claimed by some as yet another ""emergence""). Taking the long view, complexity--explored so well here--may be seen as a corrective reaction to molecular biology: a restoration of the old-fashioned physiologists' and systems-theorists' point of view, revitalized with the aid of supercomputers.