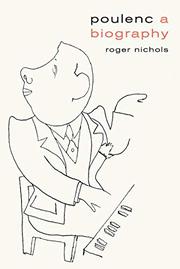 A rich scholarly biography of the prolific French composer.

Nichols, who has written previous volumes about Ravel, Debussy and Messiaen—returns with a densely detailed account of the life and music of Francis Poulenc (1899-1963), who seems barely to have drawn an idle breath throughout his illustrious career. A gifted pianist, Poulenc began composing as a teen and would continue throughout his life. As the author reveals, Poulenc wrote songs—often based on poems of those whom he admired, like Apollinaire—orchestral pieces, works for piano and other instruments (oboe, harpsichord), and film scores and opera, one of which, Dialogues des Carmélites (1957), was popular throughout the Western world and is a work to which Nichols devotes a dozen pages of musical and dramatic analysis. The author’s structural design is not surprising: chronology, family background, quotations from numerous letters and other sources, mentions of many pieces—and some accounts of others so detailed that only musicians and/or theorists will follow with much comprehension. Nichols also occasionally tells us, without judgment, about Poulenc’s romantic life: He never married, and though he was gay, he sired a child; also, until near the end of his life, he engaged in relationships with younger men. We also learn about his friendships, his professional associations (Stravinsky was a favorite), and his personal struggles (fear of death was prominent). The tone throughout is decidedly serious, though the author occasionally waxes ironic. Poulenc briefly considered an opera based on the story of Oedipus. “Not many jokes there,” quips the author. He is almost uniformly positive about Poulenc’s work, and some readers will be frustrated by the decision not to translate the French titles of the pieces under discussion. Like Graham Johnson’s Poulenc, this one likely won’t interest general readers.