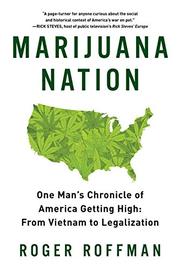 One Man's Chronicle of America Getting High: From Vietnam to Legalization

A memoir/treatise on marijuana that rises above most similar discussions.

Now that marijuana is legal in two states—and will likely be so throughout the remainder of the country in the not-too-distant future—it’s likely that the next generations of pot smokers won't realize how the drug's illegality had such a profound effect on pop culture. For instance, if Paul McCartney had access to all the marijuana his heart desired, would Rubber Soul have been Rubber Soul? that marijuana is readily accessible, within the next decade, the war on weed will be looked upon the way we view Prohibition: with a great big roll of eyes. All of which is why Roffman's (Emeritus, Social Work/Univ. of Washington) book is so important—so we'll remember. The author writes about the drug's history and his personal relationship with the leaf with an accessible voice that makes the contextual material read as smoothly as the anecdotal. However, it’s the personal stories that help the book stand out from the plethora of marijuana-focused books that have been released over the past several years. As a social work officer in Saigon during the Vietnam War, Roffman witnessed the positive effects that marijuana can have on mental health. After the war, he came to learn that weed was also a great help in alleviating physical suffering. Granted, this is all now common knowledge, but the author’s personal journey is so engaging that we're happy to relearn lessons that will permanently reshape culture as we know it. “These four plus decades of tilting at marijuana myths while seeking common ground have generated many stories,” he writes. “Perhaps they’ll be useful for readers finding themselves on a similar quest.”

Roffman's debut adeptly straddles the line between academia and narrative nonfiction, delivering a slice of history that even teetotalers will appreciate.