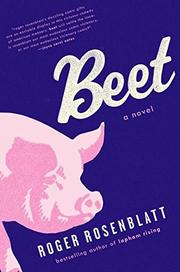 Ancient, prestigious Beet College, north of Boston, was founded by a pig farmer. The hog motif is ubiquitous, so it’s fitting that the chairman of the board of trustees, Joel Bollovate, the mighty real-estate developer, is quite a pig himself. Bollovate is threatening to close the college; the $265 million endowment has been spent. He has issued an ultimatum. Unless the faculty can come up with a new curriculum that will bring in big bucks fast, it’s doomsday. Young Professor Peace Porterfield is chosen to chair the CCR (committee on curriculum reform). Idealistic and unworldly, Peace is a hero in the Frank Capra/Jimmy Stewart mold. He believes the heart of a university is teaching and learning, not committees, but he accepts the challenge, though his colleagues are a bunch of craven PC buffoons, and the CCR meetings go nowhere. Aside from the cartoonish villain Bollovate, Rosenblatt reserves his most withering scorn for the faculty, but he also jabs at a handful of disruptive students bent on nihilistic indolence. Their leader is a transfer student, a Southern belle desperate to conceal her past, who is being courted unsuccessfully by a faux Arab, Akim Ben Laden, actually a Jewish kid rebelling against his despotic father, a rabbi. The students’ antics, which include the occupation of two buildings, fill up the hole where a plot should have been, but the humor falls flat. In welcome contrast is a straightforward description of Peace teaching a poetry class; Rosenblatt celebrates beautifully the joy of the classroom before returning to more antics. Akim, in his off-campus cave, makes an amazing online discovery about Bollovate that ends the story.

With a lighter touch Rosenblatt might have produced a successful wry comedy.