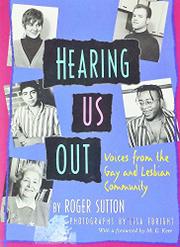 Voices from the Gay and Lesbian Community

Fifteen first-person narratives from Sutton (editor of The Bulletin of the Center for Children's Books) cover a number of circumstances encountered by the gay and lesbian communities. Young and old—from teenager to grandmother—give a sharp taste of what it is like to be gay in America, including peer-group pressure to conform when young, coming out, and support groups for the heavily alienated. Life as a gay in the military, or a lesbian in the police force, or a religious gay person, is given real substance by contributors, as are the pleasures of playing in the lesbian softball league. And then there is AIDS and all the social, sexual, political, and educational baggage strewn in the wake of the dreaded virus. Material on the more radical aspects of gay and lesbian life, such as ACT-UP, gets short shrift, but the wealth of contexts is commendable and utterly accessible. Best of all, what emerges here are the notions of gay community, culture, and self- and mutual esteem. (Nonfiction. 12+)