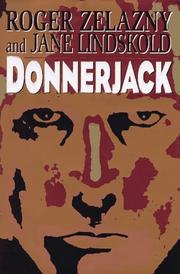 Begun by Zelazny before his death in 1995, and completed by collaborator Lindskold: a novel combining virtual reality with Zelazny's abiding interest in gods and mythology within a science fiction setting (e.g., Lord of Light, 1967). Early in the 22nd century, the real world, VeritÇ, coexists with a computer-universe, Virtó, created—or maybe discovered—during the Genesis Scramble when the world computer net crashed. Engineer John D'Arcy Donnerjack of VeritÇ loves Ayradyss of Virtó, so when she dies, John petitions death for her return. Death agrees but demands John's firstborn child. But then John is astounded when Ayradyss reappears—in VeritÇ! Soon, too, she becomes pregnant, then dies- -permanently—shortly after giving birth. Furious, John challenges Death and fights him to a draw, thereby winning a reprieve for young Jay—though when John dies, he must be raised by robot Dack. Meanwhile, the gods of Virtó, Seaga, Skyga, and Earthma, are plotting to invade and subdue VeritÇ. Later, Jay, becoming curious about the circumstances of his life, approaches Death intending to surrender—in exchange for information. Death, he learns, is also threatened by the gods' belligerence, and so arranged for Jay's advent as part of a plan to frustrate the gods' ambitions. All this doesn't even begin to describe what's going on in this prodigiously overcomplicated and overstuffed yarn—why are editors so reluctant to edit?—but bursting with Zelaznyish ingenuity, mischief, and pizzazz.