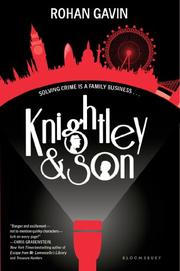 From the Knightley & Son series, volume 1

Since 13-year-old Darkus Knightley’s parents split, he sees his father, Alan—a detective of obsessive professional dedication—once a week. Darkus’ sponge of a brain has absorbed the details of every former case of his father’s, which fuel conversation during their visits. The conversations tend to be one-sided, though, as Alan has been comatose for four years. One evening, Alan miraculously wakes from his coma, ready to investigate a series of bizarre crimes. Alan is convinced that a powerful organization called the Combination is behind these and subsequent sprees. His records destroyed, Alan’s only chance to prove his case is to tap the brain of his son. And Darkus’ only chance to heal the relationship with his father (whose paternal nurturing was absent long before his hospitalization) is to solve a mammoth mystery. Even if Gavin didn’t disclaim his affinity for Sherlock Holmes, it would be abundantly evident; Darkus’ skill at deduction, perpetual observation and sang-froid are spot-on Holmes-ian. Don’t expect a puttering Watson, though. Darkus’ sidekick and stepsister, Tilly, is wrought with sass, intelligence and a never-ending supply of hair dye. Heroes, villains and settings are all fully realized through proficient description, and contemporary technology gives way to sheer brainpower.