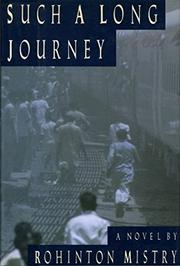 SUCH A LONG JOURNEY

A first novel from Mistry (the notable story collection Swimming Lessons, 1989) about a family man in 1971 India who experiences a political scandal firsthand. Set at the time of India's war with Pakistan over Bangladesh, it convincingly dramatizes how an honest but naive man can be compromised by events he doesn't understand. Gustad Noble is a bank clerk faced with an assortment of family problems—an inexplicable low-grade illness of daughter Roshan; a son (Sohrab) who wins a college scholarship but refuses to accept it; and a nostalgic dream for a mythical golden age. Evocative instances of domestic humor and travail (Noble, for instance, decides to bring home a live chicken for a feast, with amusing consequences) and local character sketches (notably that of Tehmul, a man harmless but brain-damaged, whom we first meet ``directing traffic around the demon tree'') give way to undercover intrigue when Major Bilimoria, an old friend who works for Indira Gandhi's secret police, recruits Noble to receive mysterious parcels and deposit sums of money (under a false name) in the bank where he works. The plot thickens (dead animals begin to appear on Noble's doorstep) as domestic travail tightens (no medications seem to help his daughter) before scandal erupts. Bilimoria is arrested: it turns out he's either a sort of Oliver North, officially transferring funds to aid guerrillas in East Pakistan, or a crook. Noble, confused, his world in disarray, travels form Bombay to Delhi for a chilling meeting with Bilimoria, who is now near- delirious. The agent admits his guilt: he intended to line his own pockets and those of his friends, including Noble. Amidst revelations of gross governmental corruption, Bilimoria dies—but Noble survives as the war begins to ``liberate'' Bangladesh. A finely textured look at India in a time of upheaval.