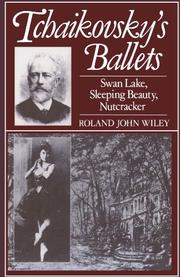 Drawing on documentary sources from the ""late imperial period,"" Wiley (Music, U. of Michigan) offers detailed histories of the first productions of Tchaikovsky's three great ballets--along with technical musical analysis of the scores. Throughout, there's an emphasis on context: an introductory chapter discusses the ballet audience, the standards for late-19th-century Russian ballet music (the emphasis on ""dansante"" melody, orchestration, timing): the traditional collaborative roles of balletmaster and ""specialist"" composer, and the prototype of La Bayadere (exotic setting, stage machinery, massed scenes, widely varied choreography). Then come close-up chapters on each ballet--the development of the libretto, the composer/choreographer composition, the casting and designing, the first-night reception (generous excerpts from reviews), the music itself. With Swan Lake, Wiley speculates on Wagnerian influences, on the collaboration between Tchaikovsky and balletmaster Reisinger (""it seems that the two men decided on a scenario and the type and placement of dances, then went their separate ways""), and on the reasons for the ballet's perhaps-exaggerated failure (to some extent Reisinger's ""ineptitude prompted the conclusion that Tchaikovsky was lacking as a ballet composer""); the musical analysis focuses on its ""carefully chosen tonalities""--the changes of key (fully diagrammed) that provide subliminal structure. After a bridging chapter on theater-reformer/librettist Vsevolozhsky and balletmaster Petipa, Wiley gives Sleeping Beauty--for him the greatest of the three (""never surpassed"" in the whole Tchaikovsky oeuvre)--even more minute examination: its thematic unity, sophisticated treatment of variation music, and ""metaphorical properties."" The Nutcracker receives less wholehearted appreciation: praise for the orchestration's ""special sound world,"" ambivalent reaction to the ""borrowed melodies"" and ""short-breathed"" numbers (dictated, in part, by the libretto). And finally, after appraising the revised version of Swan Lake made after Tchaikovsky's death (a general improvement, though ""one wonders whether he would have agreed to changes that sacrificed musical coherence to choreographic expediency""), Wiley sums up Tchaikovksy's ballet-music accomplishment: he ""took ballet music out of the hands of Minkus and delivered it into the hands of Stravinsky""--making ballet composition ""a fit occupation"" for serious composers, with enough authority to stand up to the previously imperious balletmaster. Despite the sometimes-pedantic minutiae and some murkiness in Wiley's more ambitious musico-thematic analysis: a valuable source for specialists from the ballet/ music worlds.