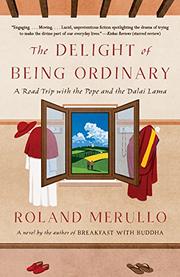 THE DELIGHT OF BEING ORDINARY

A Road Trip With The Pope And The Dalai Lama

As the subtitle signals, the leaders of two world religions are our guides on this “road trip,” reluctantly accompanied by Pope Francis’ cousin and First Assistant Paolo. He has plenty of enemies in the Vatican bureaucracy and is not anxious to give them more ammunition by facilitating his cousin’s desire for “an unofficial vacation” with the visiting Dalai Lama. This requires the help of Paolo’s estranged wife, Rosa, conveniently the proprietor of a chain of haircutting and makeup salons; she not only crafts their disguises, but voices feminist, secularist doubts about Catholicism and Buddhism while driving a borrowed Maserati with a hair-raising recklessness that alarms her cautious spouse almost more than her challenges to organized religion. Drawing on his apprenticeship as a thriller writer (A Russian Requiem, 1993), Merullo leavens the spiritual questioning with a sharp portrait of emotional and sexual tensions between Paolo and Rosa, plus escalating suspense after news reports cast the disappearance as a kidnapping and Paolo as the perpetrator. The quartet heads toward Lake Como, pausing along the way for biblically-tinged encounters with a shepherd, a prostitute, and a world-weary old movie star wondering why wealth and sex haven’t made him happy. Admirers of previous volumes will recognize Merullo’s knack for depicting goodness without treacle in his deft portraits of the pope and the Dalai Lama, and a La Dolce Vita–esque party scene spotlights his ability to discern humanity in the most decadent circumstances. There is a bit too much plot and too few moments of the transcendent serenity that formed the most beautiful passages in The Vatican Waltz (2013) and the Buddha trilogy. Nonetheless, it’s both moving and unnerving when key characters from those earlier novels reappear at a climactic encounter forecast by the holy men’s dreams to suggest that there may be spiritual hope for our battered world.

Lucid, unpretentious fiction spotlighting the drama of trying to make the divine part of our everyday lives.