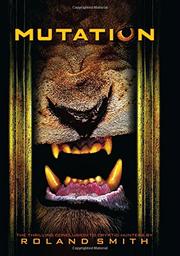 From the Cryptid Hunters series, volume 4

The cryptid hunters are back (Chupacabra, 2013, etc.), but this time they’re the hunted.

It’s only been a day since 13-year-old Marty O’Hara and his cousin Grace Wolfe (who he used to believe was his twin sister) rescued two baby dinosaurs and Grace herself from fake naturalist (and Grace’s grandfather) Noah Blackwood’s clutches. They are relatively safe with Grace’s father, actual naturalist and cryptid hunter Travis Wolfe, but they need to keep the hatchling dinosaurs out of Blackwood’s grasp and continue the hunt for Marty’s parents, who were lost in a helicopter crash over the jungles of Brazil. Grace, their school friend Luther and Wolfe head to a jaguar preserve with the hatchlings via helicopter while Marty, new friend Dylan and Wolfe’s partner, Ted, head there in a souped-up boat. But nefarious Blackwood and his paid minions are far from idle, and they have surprises both technological and historical for the young adventurers and their friends. The conclusion to Smith’s four-book series has some thrills, but key events of the denouement occur almost entirely off camera, so series fans don’t get to enjoy the villains’ comeuppance as they would probably like to. A huge cast list (thankfully summarized in a character list and series recap at the outset) and too many story threads undercut the action.

For series fans mostly; readers grabbed by the cover should go back to the beginning.