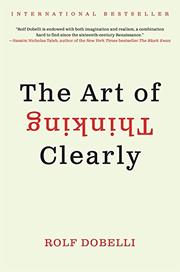 THE ART OF THINKING CLEARLY

To be human is to err, routinely and with bias. We exercise deviation from logic, writes the author, as much as, and possibly more than, we display optimal reasoning. In an effort to bring awareness to this sorry state of affairs, he has gathered here—in three-page, anecdotally saturated squibs—nearly 100 examples of muddied thinking. Many will ring familiar to readers (Dobelli’s illustrations are not startlingly original, but observant)—e.g., herd instinct and groupthink, hindsight, overconfidence, the lack of an intuitive grasp of probability or statistical reality. Others, if not new, are smartly encapsulated: social loafing, the hourly rate trap, decision fatigue, carrying on with a lost cause (the sunk-cost fallacy). Most of his points stick home: the deformation of professional thinking, of which Mark Twain said, “If your only tool is a hammer, all your problems will be nails”; multitasking is the illusion of attention with potentially dire results if you are eating a sloppy sandwich while driving on a busy street. In his quest for clarity, Dobelli mostly brings shrewdness, skepticism and wariness to bear, but he can also be opaque—e.g., shaping the details of history “into a consistent story...we speak about ‘understanding,’ but these things cannot be understood in the traditional sense. We simply build the meaning into them afterward.” Well, yes. And if we are to be wary of stories, what are we to make of his many telling anecdotes when he counsels, “Anecdotes are a particularly tricky sort of cherry picking....To rebuff an anecdote is difficult because it is a mini-story, and we know how vulnerable our brains are to those”?

Hiccups aside, a mostly valuable compendium of irrational thinking, with a handful of blanket corrective maneuvers.