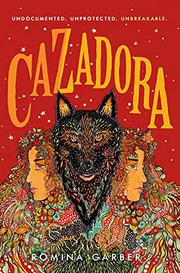 From the Wolves of No World series, volume 2

The follow-up to Lobizona (2020) sees its protagonist’s fight for equality and acceptance reach new heights.

After the events of the first book, Manu and her friends flee their magical school and are on the run to avoid the Cazadores who aim to capture anyone who doesn’t conform to the stringent gender binary laws of their world. Manu, as the first ever known female werewolf and a Septimus/human hybrid to boot, could lose her life if she’s discovered. Illegal in both worlds, Manu’s only chance is to find the Coven, a legendary underground movement of outcasts who she hopes will welcome them with open arms. Once she meets the people of the Coven, Manu encounters a world full of Septimus who are willing to risk anything for change. But how far is Manu willing to go? In this effervescent sequel full of magic and beautiful imagery, Manu learns to reclaim her own narrative and, together with her lovable found family, including misfits Saysa and Cata as well as boyfriend Tiago, stake out a place in the world where she belongs. Refreshingly, Manu and her friends are not presented as uniquely positioned to change the world: They join a multigenerational, ongoing fight against oppression that aims to give voice to the nonconforming voiceless. All characters are Argentine, with a variety of skin tones, gender identities, and sexualities.

An inspiring, powerful tale of belonging.