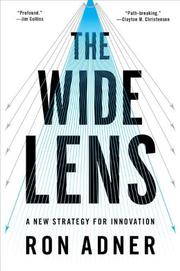 A New Strategy for Innovation

Adner (Strategy/Dartmouth Coll.) debuts with a valuable perspective on how to innovate successfully in an interdependent world.

Even the finest new product fails when consumers don’t have a chance to choose it, a situation that occurs when a company’s partners—the distributors, retailers and salespeople who make up a company’s business ecosystem—do not adopt the innovation. The path to market, writes the author, is just as important as the new product itself. Examples abound: In the late 1990s, Michelin’s launch of an innovative run-flat tire failed when the company could not convince enough service stations to adopt its repair system. In the 1980s, Philips Electronics developed a great high-definition television with superior picture quality, but HDTV cameras and transmission standards had not yet arrived, leaving Philips with a $2.5 billion write-down. In each instance, the company’s focus on execution created a “blind spot” hiding key dependencies critical to success. By taking a broader view of their business ecosystem, companies can identify challenges that might undermine success and act to reconfigure the ecosystem in ways that eliminate problematic bottlenecks. In richly detailed stories, Adner shows how this was executed by Hollywood studios in introducing digital cinema and by Amazon in developing the market for e-readers. He also describes ongoing efforts by a fascinating new company named Better Place, which has been considering holistically the ecosystem of obstacles preventing the introduction of electric vehicles into the mainstream consumer market. The author pays close attention to Apple’s successes of the past decade, during which it reconfigured ecosystems to achieve success in three markets: music players, smartphones and digital tablets. Apple’s “hidden point of differentiation has not been in its elegant products but rather in its approach to leverage its advantage from one ecosystem into the next.”