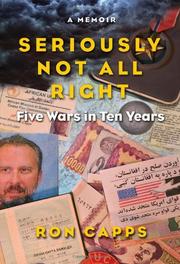 SERIOUSLY NOT ALL RIGHT

As a foreign service officer and soldier, Capps discovered firsthand the psychological and emotional tolls of wartime.

The author, who is the founder and director of the Veterans Writing Project, begins his memoir with an account of the time he nearly committed suicide. Capps joined the military as a careerist back in the mid-1980s, though he was sharp enough to take and pass the foreign service exam, and he traveled to many global flashpoints during his career. The author writes in a fairly straightforward style—in Kabul, the “old market is...just as much a warren of alleys as it was five hundred years ago. It was a great place to take the temperature of the city—to walk around and get a feel for how safe things felt or what people were talking about”—but the narrative is thick with portent. Capps has seemingly seen it all, including Rwanda when the Hutus and Tutsis were slaughtering each other and battlegrounds in Kosovo, Afghanistan and Iraq. The horrors of what he has witnessed, and his inability to right just one of the overturned carts, have followed him to bed at night—to call them nightmares would be to diminish their stark terror—and inflicted him with shakes, panic attacks and severe depression, as well as a horrible fear: “[T]he thing that really scares me and sends me running for help—is that I am not in control of my mind.” Eventually, to combat his raging PTSD, Capps sought both psychiatric and pharmacological help, and he is now glad to no longer be a participant in the suffering of war. “There will always be wars and there will always be dead guys,” he writes in closing. “But someone else is out there now. Godspeed to them. I’ve done my share. I’m going home.”