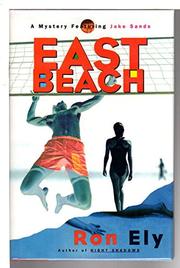 Retired salvage-agent Jake Sands (Night Shadows, 1994) is devastated by the death of nubile Santa Barbara waitress Julie Price, a beach bunny with invitingly soft bosoms, but not so devastated that he can't call her folks and announce that he's on the case. It's especially convenient that the other case he's agreed to put a few hours into—surveillance on a nearby ranch for a client who wants to identify the men who are coming and going—leads back to Julie's murder with the suspicious deaths of several ranch guests, and then to Julie's bronzed Australian boyfriend, Collin Fraser. Examining a revealing bulletin board at Julie's home and the interior of her Jeep Wrangler, which has obligingly popped up, complete with ignition keys, Jake realizes that Julie just happened to die hours after she got $40 million richer. But in order to lay his hands on the killer, he'll have to get close to Collin, and that means hours and weeks and pages and pages of power beach volleyball while the two men sniff each other out. The mystery begins well, then peters out. Long before the end, Jake's less interested in avenging Julie than in perfecting his overhead serve and stuffing the opposition at the net. Mystical stuff, man.