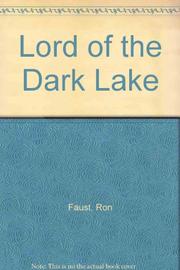 LORD OF THE DARK LAKE

Deadly shenanigans on a mad billionaire's private island. How mad? Well, just after he's returned from his latest voyage working a tramp steamer incognito, Alexander Krisos offers his son's friend Jay Chandler, the archeologist who's working on the nearby temple of Poseidon, $100,000 to throw himself into the sea at the cliff path where another guest missed his footing and took a fatal header—and then, when Chandler politely declines, takes the plunge himself. (Later, Chandler, just to prove that he's not much saner than his longtime patron, dives in after all.) It looks like an eventful week, even before the guests arrive for Krisos's annual summer bash: His discarded wife Sophia still lives in a humble cottage nearby; daughter Maria, whom Chandler thinks of virtually as a sister, keeps coming on to him despite his manly refusals; her paralyzed brother Nico throws a drink in his face. With hosts this special, expectations run high, especially after elderly pederast Simon Rye, Krisos's literary consultant, is killed and thrown into a cistern (and that's only the beginning of his corpse's adventures). But soon after the arrival of British actress Pamela Bristol, bullfighting scion Antonio Aguilar, Texas mogul Jack Clyde Black and his wife Poochy, Madonna wannabe Gypsy Marr, deposed African dictator Biki Benematale, SS protÇgÇ JÅrgen Leuger, and the rest of the high- profile guests, you realize it's more of the same: endless sinister portents, punctuated only by excerpts from the dossiers Krisos's security chief has compiled on the guests, and the occasional gory fatality. Under this kind of pressure, the guests, who are obviously meant to be fascinating monsters, turn poignantly helpless, as if they were doomed to wait forever at the station for a plot that never quite arrived. Long before the finale—a tingly updating of Theseus' adventures in the Minotaur's cave—these caricatures, who would have been perfectly adequate one of Faust's potboilers, collapse of mythic inflation. Memo to the author (Fugitive Moon, 1995, etc.): Stick to overplotted actioners.