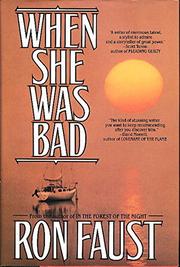 WHEN SHE WAS BAD

Indiana Jones meets the Dragon Lady in this knockabout tale of rolling stone Dan Stark and his now-and-then, 20-year adventures with the evil, evil Chantal d`Auberon. It's 1972, and Stark's a reporter for the Florida Key Times who's sent out to interview Christine Terry, survivor of a Caribbean yacht wreck that left her husband dead and her drifting on a lifeboat for 19 days. But there were stolen emeralds aboard that yacht, she whispers to him, and together they slip off to retrieve them. Stark thinks it's all too easy, and he's right: Christine isn't Christine, of course, but Chantal, and abandoning Stark while she runs off with the swag is only Act One of a long- running matinee serial. Years pass before Stark, disguised as a coke dealer, gets his chance for revenge. And no sooner has he gotten it than Chantal's after him again, nearly killing him before getting sent up on drug charges that leave her in prison for more short years (a few paragraphs) before she's ready for still another crack at Stark, now run through a successful business and ripe for further treachery. A stint as a beach bum, a new career as a campground owner and sometime author—Chantal (next seen as the Comtesse de Villiers, the queen bee of Puerto Vallarta) can ruin Stark and leave him for dead, but she can't leave any marks; and in the meantime (by now it's 1990), he's made contact with Chantal's daughter Gabrielle, who may or may not be his daughter too. Following in the footsteps of James M. Cain but without Cain's bile, Faust (In the Forest of the Night, 1993) makes Stark's whole life a pleasant afternoon at the Bijou. As for Chantal, ``she was a viper.'' ($75,000 ad/promo)