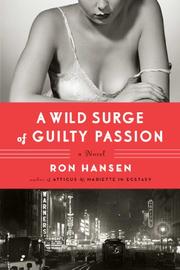 A WILD SURGE OF GUILTY PASSION

Why take on a story that’s already been the source for a classic crime novel and film? Partly to move beyond the restrictions of genre fiction: Instead of ventriloquizing noir tropes, Hansen explores the slow path to dissolution that begins with doomed love, as well as the sexism that corseted women faced in the 1920s. The novel fictionalizes the lives of Judd Gray, a lingerie salesman, and Ruth Snyder, the wife of an art director at a Manhattan magazine, who both feel restricted in their marriages (though Hansen deliberately fogs just how abusive Snyder’s husband is). After meeting through a mutual acquaintance, the two pursue an intense affair that lasts more than a year. Their trysts speak to Hansen’s second alteration to the story: His sexual candor gives the book an eroticism and intensity that would have been unthinkable in Cain’s 1943 novel, Double Indemnity, or its film version. The sensual appeal of the affair wears off quickly, though, as Judd slips deeper into alcoholism and Snyder so despairs of her marriage that she begins to consider how her husband might be killed. Hansen brilliantly characterizes the denial and moral degradation that overtake Judd and Snyder, largely through a passive voice; the two don’t do things so much as have things done to them. Yet Hansen never makes them unsympathetic, a feat that’s particularly impressive after they have been arrested for their roles in the death of Snyder’s husband. Describing the Judd-Snyder trial and accompanying media circus, Hansen occasionally lapses into passages of flat-footed journalistic reportage, yet even the dry style serves a purpose: It brings into sharp relief the lurid and sexist coverage of the trial (which made Snyder into a predatory nymphomaniac who snared the hapless Gray), and questions how much Snyder was a victim of her times.