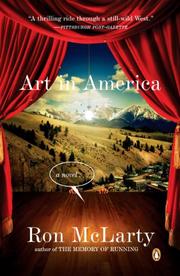 After offering a laboriously comic itinerary of its NYC author-protagonist Steven Kearney’s numerous unpublishable novels and plays, McLarty settles into a rich characterization of a hopeful loser bereft of both literary success and his angry girlfriend. Steven is thrown a lifeline when the town of Creedemore, Colo., offers him a lucrative residency in return for writing a historical play about the area’s storied origins. So it’s off to Creedemore, where Steven is greeted by an officious spinster and introduced to Creedemore’s eccentric populace. Brisk short chapters move things along smartly, and action abounds, as a range war of sorts erupts between near-centenarian feed-store mogul and landowner Ticky Lettgo (we’re not making this up) and “Mountain Man” Red Fields, an environmentalist Age-of-Aquarian planning to offer adventurous river rafting trips through waters Ticky claims are also his exclusive property. Add in juxtaposed peeks back east, where Steven’s buddies Roarke (a lesbian actress-director) and Tubby (a Falstaffian construction worker) keep tabs on his western adventures, and you have a cheerfully overstuffed tale whose ungainly bulk is redeemed by energetic prose and busy comic detail. There are also loud protests, some politically inspired, others motivated by sheer cussedness; lively courtroom battles; a bomb threat or two; and an overload of macho posturing (some of it performed by female characters). Vivid characters pop up frequently, including a transplanted Eastern sheriff (a man of reason serving where unreason rules), a foulmouthed reverend and a man known as “Cowboy Poet,” a tireless fount of hilarious doggerel. And there’s a corker of a climax, during which we’re treated to the memorable opening scenes of Steven’s commissioned sagebrush masterpiece.

An actor adept at entertaining and holding an audience shows himself a novelist gifted with the same skills. The book is not a masterpiece, but it’s an immensely engaging and winning performance.