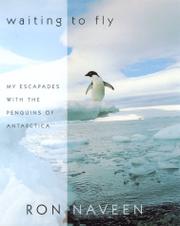 Escapades with the Penguins of Antarctica

Their behavior might be comedic for us, but for penguins it translates into sex, food, and turf warfare, as explained by field researcher Naveen in this tenderhearted profile of the short-feathered denizens of the far south. What propels Naveen’s newest book (after Wild Ice, not reviewed) is a three-cylinder engine: He wants to make the reader as envious as possible of his penguin-chasing field days on the Antarctic Peninsula and the South Shetland Islands; to smite the reader with the same bewitchment he feels in a gentoo or chinstrap’s presence; and incidentally to present a brief history of penguin research in the Antarctic, starting informally with sealers and formally with Louis Gain and the Second French Antarctic Expedition. It’s a successful formula for anyone at all interested in kneeless, tux-clad bird life. A penguin field man, Naveen is there to observe and record how they “find mates, set up shop, court, lay eggs, raise chicks, and then get out before frigid weather locks in once again.” Although penguins are hardwired for predictable behavior, with little intuitive freedom, this lack of surprise is fashioned by Naveen into meaningful qualities: the penguin as messenger of environmental tidings, and the penguin as symbol of what it means to live in synch with the earth, and how we as a species fall short in comparison. Naveen knows when to turn loose penguin facts and figures, and he knows how to rein them in. He also knows how to lightly delineate a landscape of thousands upon thousands of the black-and-white, upright, animated birds set against a green and pink mountainside on a scale so vast it steals your breath away. Then again, he closes every chapter with juddering empurpled wordplay that can thankfully be seen coming and thus avoided. Naveen knows and loves his subject—he is the first to admit that he is never happier than when mired in penguin guano—and he writes of it and its place with uncommon fluency. (color photos, not seen)