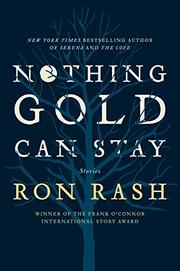 NOTHING GOLD CAN STAY

Traps are embedded in the violence-streaked stories that comprise another fine collection from Rash (The Cove, 2012, etc.).

Take the excellent opening story: "The Trusty." That’s Sinkler, the unshackled member of a chain gang in the North Carolina mountains (Rash’s invariable setting). While fetching water for the gang, the accomplished grifter sweet-talks a farmer’s young wife into eloping. She knows the hidden trails, and that’s where the tables are turned, violently. In the title story, two petty criminals, hooked on pills, steal some gold teeth. They’re about to cash in, home free, but we know they’re trapped losers, sure to be busted. There’s an actual trap, a bear trap, in "A Sort of Miracle," the story of three knuckleheads on a mountainside. The unseen bear springs the trap and gets the ham, but the trapper dies as the black comedy intensifies. Of these 14 stories, it’s the two from the Civil War era that will haunt you. In "Where the Map Ends," two runaway slaves are heading into the mountains, where many of the whites are Lincoln supporters. How could they have known that the farm where they shelter belongs to a man unmoored by his wife’s suicide, slipping into madness? He helps the older slave but has a horrifying end in mind for his young mixed-race companion. In "The Dowry," the war is eight months past. Ethan fought for the Union. Now, he seeks to marry the daughter of a Confederate colonel, implacable since losing a hand on the battlefield. The story ends with a second severed hand. Also notable are "The Magic Bus," a ’60s story in which a naïve country teenager has her disastrous first encounter with hippies, and "A Servant of History." Here, a very green Briton, researching ancient ballads in 1922, traps himself on a remote farm by bragging about his half-remembered Scottish ancestors. What had started out lightly satirical turns very grim indeed.

Rash’s oneness with the region and its people makes an indelible impression.