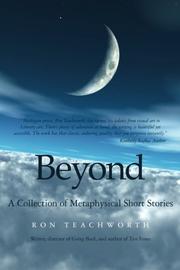 From New Mexico to Canada to Scotland, Teachworth’s (Two Stones, 2008, etc.) YA short stories introduce readers to a variety of teenage protagonists whose lives have been touched by intangible forces.

In “Fireflies,” the opening story of the collection, the soccer-playing Tamia, a young girl of Navajo and Mexican-American descent, completes a science project about fireflies, but she draws community attention to problematic power lines in the neighborhood. “Callanish Stones” tells the tale of a young boy, a shipwreck, a daring rescue and a remarkable reunion. Nicho learns the extent of God’s healing powers in “Saving Grace.” A father passes down a chicken-bone necklace of potentially magical proportions in “All the Right Moves.” Each of Teachworth’s short stories addresses the forces of the natural or supernatural worlds and the power of faith. He gives characters detailed back stories. The tales are readable and may appeal to younger readers put off by long novels. Unfortunately, the voices of Teachworth’s teenagers don’t ring true. Dialogue tends to feel inflated and inauthentic. For example, in “Play,” Mila, who is coming to terms with the abhorrent behavior of her abusive father, replies to her mother’s apology with credulity-straining, mature language: “We need to support each other, stay strong, and plot out a future. There will be a lot to think about, like our livelihood.” Moreover, the exposition is so detailed, it occasionally makes the conclusion of each story feel abrupt in comparison. The resolutions often need additional explanation and support due to the supernatural elements of the plot. Readers who sympathize with these characters may want to know not just how the story ends, but how the main character fares at the conclusion of the journey.

May appeal to teens who may be interested in—but not quite ready for—Nicholas Sparks.