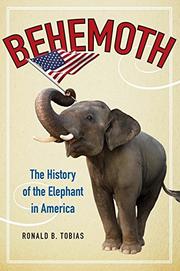 The History of the Elephant in America
by Ronald B. Tobias
BUY NOW FROM
AMAZON
BARNES & NOBLE
LOCAL BOOKSELLER
GET WEEKLY BOOK RECOMMENDATIONS:

A personable exploration of how the pachyderm has impacted America since its arrival in 1796.

Former Discovery Channel producer and natural history filmmaker Tobias chronicles the history of the world’s largest living land animal from its arrival on American shores when market trader Jacob Crowninshield commissioned a young female calf to be transported by sea from Calcutta to New York. Crowninshield greatly profited from the gargantuan animal’s public exhibition and swift sale, as would a long line of others, including entrepreneur-turned–circus man Hachaliah Bailey and curiosity museum curator P.T. Barnum. Tobias highlights others who have benefitted, as well, including Abraham Lincoln and the Republican Party, who began using elephants as its branding symbol since its formalization in 1874. The author also tracks the performance “careers” of monstrous circus elephants, like mid-1800 ringmasters Raymond and Waring’s “Hannibal,” who registered at nearly 12 feet tall and 15,000 pounds; Tusko, dubbed “the World’s Meanest Elephant”; and Jumbo, Barnum’s lucrative cash cow. The accidental (and rage-induced) trampling of handlers, trainers and spectators, the author observes, created a fearfulness that inevitably led to their historically cruel but responsibly necessary euthanasia. Still, audiences remained transfixed by the sheer heft of these animal oddities, as did farmers and collectors. In lighter chapters, Tobias taps the pachyderm’s connection to Shakespeare, the birthing and mothering of their offspring, and he provides a compassionate piece dedicated to Hohenwald, Tennessee’s Elephant Sanctuary, a humanitarian refuge for “old, sick, and abused elephants” where virtual visitors can enjoy and interact with the animals remotely via 14 mounted surveillance cameras.

Intermittently fascinating, comprehensive reading on the giants of the big top and beyond.