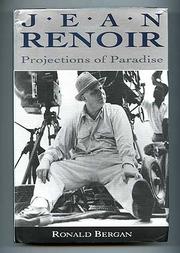 Film historian Bergan (The United Artists Story, not reviewed) contributes a warm and intelligent new biography of the great French filmmaker to the celebration of the centennial of his birth this fall. The son of Pierre Auguste Renoir, the Impressionist painter, Jean (18941979) became one of his father's favorite subjects not long after his birth. His youth was idyllic, protected by a loving family. Particularly in the early chapters dealing with Renoir's childhood, Bergan skillfully finds a tone akin to that of the director's films: gently meandering, loving, and good-humored, with more than a hint of melancholy. He meticulously relates Renoir's life to his work, showing how such experiences as a youthful first encounter with a puppet theater and wartime service in the trenches and as an airborne observer were later put to use in his films. Like Renoir, Bergan is scrupulously honest in depicting his characters, offering balanced portraits of the director's first wife, the pampered, self-regarding actress Catherine Hessling; his frequent collaborator, the sometimes temperamental actor Jean Gabin; and a series of Hollywood producers who blighted the years during which WW II forced Renoir to work in America. The author also offers discriminating, if brief, critical commentary on all of Renoir's films; he is enthusiastic, but his analyses are thoughtful and generally on the mark. On the downside, as Renoir's filmmaking career begins to slow down after his trilogy of mid-'50s masterpieces—The Golden Coach, French Cancan, and ElÇna et les Hommes—the narrative becomes somewhat perfunctory. One wishes that Bergan had continued to lavish on readers the details in which earlier sections of the book revel. One also hopes that some smart publisher will bring out English-language editions of Renoir's letters and novellas, still unpublished in the US. A charming work that successfully and lovingly evokes the world of one of the cinema's true giants.