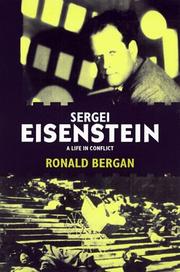 A Life in Conflict

This biography limns a man driven by ideas but thwarted by oppression from all fronts—family, business, and government. Using material recently made public by the Russian government, South African-born film scholar Bergan (Jean Renoir: Projections of Paradise, 1994) effectively dispels perceptions of the Soviet director as a “calculating, didactic theorist whose films ‘lack humanity.’ “ Bergan provides a reflective yet chatty portrait of Eisenstein as a gifted iconoclast who escaped his domineering, bourgeois father to embrace the new Soviet state and the “Eighth Art” of film only to confront greater tacticians in Hollywood types and censure by Josef Stalin. Paramount terminated Eisenstein’s contract early, and David O. Selznick rejected his screenplay adaptation of An American Tragedy as potentially a “most miserable two hours to millions of happy-minded young Americans.” Stalinist censors rejected his now-lost film Bezhin Meadow (which Bergan believes may have been his greatest achievement) and forced Eisenstein to —confess— its political groundlessness and anti-artistic tendencies. Bergan’s erudite, jargon- free film analyses complement the personal history and reveal Eisenstein as a humanist and early maker of movie illusion. Long before George Lucas added sound to outer space in Star Wars, Eisenstein fabricated the bloodbath on the Odessa Steps in The Battleship Potemkin. True to the power of the film image, it stands as an icon of the 1905 revolution. As for the image of Eisenstein, this biography views him not as an underappreciated film pioneer who must be revisited but as a cinema genius of lost potential. Like Orson Welles, Eisenstein won an early place in the cinema pantheon and followed it with decades of fits and starts, notably the aforementioned Bezhin Meadow and the truncated, John Dos Passos-financed QuÇ Viva MÇxico! An accessible, smart chronicle of a creative genius attempting to follow art and country. (36 b&w photos, not seen)