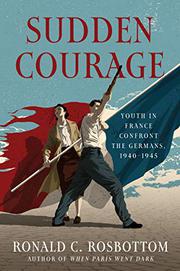 An exploration of the reasons so many young French citizens stepped up to work against Nazi occupiers and the “traitorous” Vichy government.

As Rosbottom (French and European Studies/Amherst Coll.; When Paris Went Dark: The City of Light Under German Occupation, 1940-1944, 2014) shows, World War II interrupted their developmental time frame, forcing them into an adulthood for which they were little prepared. There are many common threads in the memoirs the author was able to source—e.g., patriotic pride and hatred of the occupiers; strong Jewish identity—but a moral certainty of right and wrong was the dominant characteristic in all of them. Many practiced soft resistance, including art, propaganda, false documents, and minor but persistent sabotage. Others used hard resistance: intelligence-gathering, assassinations, derailments, etc. By far the most organized were the young communists, who had funding from Russia and accepted and encouraged girls to join. Under Stalin’s orders not to attack their occupiers after the 1939 treaty with Hitler, the youth concentrated on undermining the German-backed Vichy government and the French police who worked directly with the Germans. Hitler’s invasion of Russia ended that ban. The cultural and social phenomena affecting students before the war—film, jazz, dancing, and a new taste of freedom—guided them. They were not driven by politics and didn’t think of the dangers to themselves or their families. At first, their youth, especially for girls, protected them. When the SS and Gestapo took over in 1942, everyone was suspect, and security tightened considerably. Rosbottom uses impressive character studies to drive his narrative—e.g., a 17-year-old who was executed as a reprisal; a blind young man who became a natural leader both in the Resistance and during the many months he spent in prison. Early resisters were disorganized, confused, and incompetent, but they learned quickly.

A fine history that brings back to light the contributions of the younger, often forgotten resistance fighters.