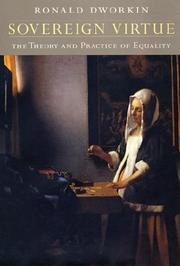 The Theory and Practice of Equality

A case for equality as a policy-guiding principle in contemporary democracy, written by noted legal philosopher Dworkin (Freedom’s Law, 1996, etc.).

Lawmakers in the post–Cold War “third way” democracies choose to protect individual liberty at the expense of equality, according to Dworkin. As he sees it, the consequences of this course (particularly in the US) are severe: the failure of health care and campaign finance reform, welfare cutbacks, and the elimination of affirmative action. More alarming to Dworkin, however, is the degree to which these policies reflect a lack of “equal concern” for individuals, which he calls the “indispensable virtue” of legitimate sovereigns. Rejecting the idea that liberty and equality are mutually exclusive ideals, Dworkin outlines a second chance for “third way” democracies. A legitimate government’s objective, he insists, must be to insure that the “fates” of individuals are “insensitive” to their identities but “sensitive” to their choices. It accomplishes this by providing for equality through the initial outlay of resources, with citizens accepting responsibility for subsequent, freely made choices. Part I, comprised largely of theoretical pieces written in the 1980s, explores the intersection of equality, liberty, and community in hypothetical scenarios. Anyone frustrated by Dworkin’s customarily high level of abstraction will be heartened by Part II, which is considerably more earthbound and nearly self-contained. These more recent, policy-based chapters on campaign finance reform, affirmative action, genetic technology, and euthanasia, among other issues, are thick with rigorous case analysis and fascinating data about the state of equality and liberty. This section is particularly valuable for its presentation of practical policy issues along with the theoretical penumbras emanating from them.

While more compelling for its articulate announcement of crisis than for its proposed solution, Dworkin’s study of what we “can and must do” to “redeem our political virtue” sounds a distressing alarm.