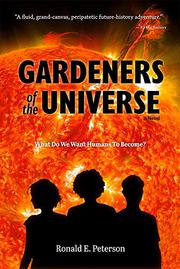 GARDENERS OF THE UNIVERSE

The Torae, an ancient, advanced alien race who consider themselves stewards of all intelligent life, judge Homo sapiens to be a promising species for development. They imbue three American children with vast mental abilities—Californian Rianne, a budding bioengineer; working-class Minnesotan Dan, a computer prodigy; and insightful Sarah, a Virginian who’s a natural diplomat and ethicist. Via intermittent direct communication with the Torae and through their own maturation, the three lead humankind to radical technological and conceptual breakthroughs. But there’s a complication that not even the far-seeing Torae imagined: the Unity, a spacefaring, insectlike race who have the astounding ability to manipulate tiny black holes. The Torae judge the Unity to be a galaxy-threatening pest and launch a war of extermination against them. When the existence of Earth is threatened, the children’s mission becomes even more urgent. Most of the leapfrogging narrative involves Rianne, Dan, and Sarah as adults. Over the course of their lives, they witness mankind’s implantation with communication devices; fight a cyber-based world war; create new life; and medically unlock secrets of immortality. Peterson has an impressive background—he’s a physicist and the former vice president of technology at Honeywell—and his expertise comes through in his highly ambitious sci-fi debut, which offers serious speculation into the future of humanity. At the same time, however, the story never feels didactic or constrained by an agenda to educate readers with techno-speak. Instead, the author manages to juggle a large ensemble cast while clearly exploring the ramifications of each paradigm shift within the suspenseful narrative. Still, it’s a bit odd that humanity has such a low-key reaction to finding out that the Unity and the Torae exist; they just seem to take it all in stride.