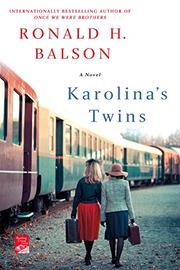 The third in Balson’s promising series about a husband-and-wife investigation team specializing in Holocaust cases.

Hard-bitten Chicago private eye Liam Taggart and his attorney wife, Catherine Lockhart, met while solving a Holocaust-related mystery in the first installment, Once We Were Brothers (2013). Now, as the pair is anticipating the imminent birth of their firstborn, they are contacted by Lena Woodward. A wealthy widow in her 80s, Lena hopes to locate the twin daughters of her friend Karolina, who perished during the Holocaust. Lena relates her story to Catherine incrementally throughout the book. Her survivor account becomes the main source of suspense, since she is reluctant to reveal the full horror of what she experienced until the end. Meanwhile, her son, Arthur, is suing for control of her affairs, claiming that Lena suffers from dementia. The basis for his petition for guardianship is his mother’s sudden obsession with an impossibly quixotic quest. At least that is the ostensible reason—Arthur’s real motivation, Catherine suspects, is that he fears his mother will dissipate his inheritance on a wild goose chase. We learn that Lena was orphaned after the Nazis occupied her small Polish town, Chrzanow, that she was assigned to work with Karolina in a coat factory in the ghetto, and that Karolina’s German lover kept the two girls supplied with enough food to survive. Ultimately, the ghetto is liquidated and the two girls are sent, again through the intervention of a sympathetic German, to Gross-Rosen, a less lethal—comparatively speaking—concentration camp. On the train, Karolina is warned that the Nazis will kill her infants upon arrival at the camp. The desperate measure the friends take to save the twins may have caused their deaths and has haunted Lena her entire life. Scenes involving a cantankerous probate judge demonstrate that Balson, a practicing Chicago attorney, knows his way around a courtroom.

Balson’s dialogue is stilted and his prose is workmanlike, but the survivor’s tale is the main attraction and does not disappoint.