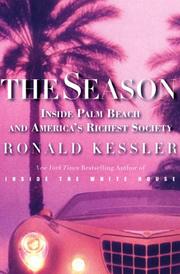 Money matters in this high-society resort, according to bestselling author Kessler; so do pedigree, the right wardrobe, the right restaurant—and bigotry and misogyny. Palm Beach is an island enclave off the east coast of Florida, first established as a playground for the rich in 1892 by Henry Flagler (Standard Oil, railroad money). Among the first winter residents were John D. Rockefeller, John Jacob Astor, Andrew Carnegie, and J.P. Morgan. Recent homeowners include billionaire entrepreneurs from television, cosmetics, real estate, and finance. Rich as they are, however, the newcomers can’t be admitted to Palm Beach’s inner circle without running the gauntlet of the Old Guard socialites and their leader, the wealthy widow Barton Gubelmann (there are a lot of wealthy widows and divorcÇes in this story). Gubelmann introduced Kessler (Inside the White House, 1995, etc.) to nuances of who was in and who was out. Out are Jews: Palm Beach’s two most illustrious private clubs permit no Jewish members and are touchy about Jewish guests. Other ethnic groups serve as maids, cooks, gardeners, and waiters, until recently legally required to be registered and fingerprinted (that local law was declared unconstitutional in 1985). Donald Trump comes off as a hero: His club, Mar-a-Lago, admits not only Jews but African-Americans. Shopping, plastic surgery, drugs, sex, and charity balls help Palm Beach regulars pass the time. Women are appreciated for their (cosmetically enhanced) bosoms, their wardrobes, and their ability to organize parties. The Jewish author donned a tuxedo to socialize and gather tales of both old and new money, yet he also established rapport with some of the lesser mortals on the island: a “walker,” a restaurant manager, and an eccentric blond real estate broker from London. None of his sources raise the level of discourse above a Monica Lewinsky—Linda Tripp chat. Although Kessler tries to be nonjudgmental, the weight of accumulated anecdote paints a picture of narcissism and decadence that is both pitiable and unsettling. (16 pages photos)