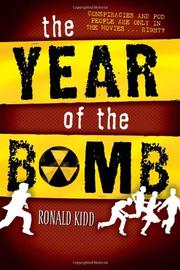 THE YEAR OF THE BOMB

Ever-so-aptly billed “Stand By Me meets Invasion of the Body Snatchers,” this multilayered historical novel features a quartet of quarrelsome—but loyal in the crunch—13-year-olds responding to the anxieties of the McCarthy-era Cold War. Being horror-movie addicts, Paul and buddies Oz, Arnie and Crank are over the moon when the crew filming the abovementioned SF classic-to-be sets up in their small California town. Better yet, the four hook up with a beautiful extra, an FBI agent who claims to be investigating the filmmakers for Communist connections—and a troubled young scientist named Richard Feynman, whose odd behavior and chancy friends lead the lads to the exciting suspicion that he’s a spy. Kidd folds in good measures of comic relief and period detail, separates fiction from fact in an afterword and lets his characters develop in credible ways. He also gives Paul plenty of food for thought about the hazards of rushing to judgment, of taking people at face value and, most profoundly, of living in a pervasive climate of fear—all decidedly relevant topics for today’s readers to mull, too. (Historical fiction. 11-13)