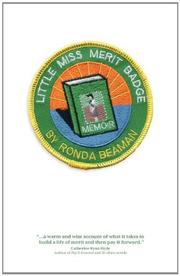 Earning Girl Scout badges, by any means necessary, becomes a girl’s way of coping with her seriously dysfunctional family in this comedic memoir.

Beaman (Communications and Leadership/California Polytechnic University; You’re Only Young Twice, 2006) grew up desperate to win approval from her narcissistic father. Good grades, athletics, talent competitions—she strove for success in everything, and often succeeded. But Beaman’s real métier was earning Girl Scout merit badges and, by the time she was done, she needed two sashes to hold them all. This memoir structures striking moments in the author’s childhood and coming to terms with her dysfunctional family through badges won and lessons learned, reflecting throughout on the real nature of merit. The author writes with vivid energy and humor, and she knows how to turn a phrase; she describes her hospitalized father as “slowly deflating, like a basketball left too long in the garage.” She is fair to her parents, probably even diminishing their selfishness. A less resilient girl would have a different story to write. Beaman, though, is amazingly resilient, hard-working and determined, putting the kind of effort into launching a front-yard charity carnival that would do an IBM project manager proud. Big, bright humor is both shield and weapon in this memoir, a way to avoid self-pity while skewering her parents, other adults and herself. Sometimes it works, but sometimes the humor feels artificial, more interested in getting off a zinger than exploring real feelings. When her father unkindly criticizes her efforts to win a singing audition, Beaman comments “As usual, he really knows how to put a song in my heart!” Each chapter ends with a heavy-handed prepackaged lesson, as with “Making Music”: “The instrumental lesson I really learn, however, is that my life is my own composition”; Beaman often seems the same eager-beaver overachiever she was as a child, desperate to prove what she’s learned.  And, though she suggests at the end that she’s moved beyond earning badges, Beaman says little about her adult self besides her achievements. An amusing memoir that would be stronger if it were more grounded in an adult perspective.