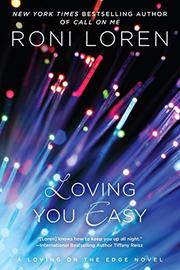 Hayes Fox, an intense, brooding dominant, is in hermit mode after serving three years in prison on a wrongful conviction for rape. Too gun-shy to return to the scene, he plays in Hayven, a virtual world he runs with his best friend and business partner, Ren Muroya. Ren is bi, commitment-phobic, and an incorrigible flirt, and he makes sure Hayes knows he’s interested. But Hayes doesn’t want to risk their friendship. Instead, he finds a friend and virtual lover in Lenore, a popular submissive in Hayven. Sexy, curvy, confident Lenore is the avatar of Cora Benning, a combat boot–wearing geek girl whose unsatisfying romantic history led her to create a fantasy alter ego who could live out her repressed kinky desires. When she discovers Hayven has been hacked, Cora offers Ren and Hayes her white-hat hacking skills, and the stage is set for sexual tension, an explicit BDSM ménage, and a polyamorous happy-ever-after. Loren capably juggles three character arcs (Hayes’ return to the world of the living, Ren’s falling into love and real attachment, and Cora’s self-esteem issues and sexual awakening) as well as a dangerous external threat who will stop at nothing to bring down FoxRen media. The plot moves quickly, but three distinct personalities with unique histories and motivations emerge through scenes of witty dialogue and authentic emotional awakenings. Hayes, Ren, and Cora can seem a little too perfect, and some readers might wonder whether the blink-and-you-miss-it adjustment period required for a poly relationship with two doms and a newbie submissive was a casualty of trying to cover so much ground.