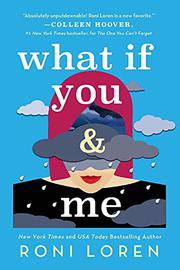 A true-crime obsessive tries to let down her guard with the grumpy next-door neighbor who secretly has his own emotional demons to face.

Bubbly, lively Andi Lockley has always harbored a deep love for horror and true crime, and as a podcaster and writer, she can dive into these subjects head-on as a means of confronting her own anxieties about the world—as well as the very real trauma from her past that occasionally rears its ugly head. But she often wonders whether her obsession with scary subjects has left her too afraid to be truly vulnerable with anyone, especially when it comes to potential romance. A chance meeting with her gruff neighbor, however, leaves the door open for the possibility of something that could free her from the fear that's been holding her back. Former firefighter Hill Dawson has been struggling to find a new purpose in life after an accident in the field caused him to lose part of his leg. It doesn't help that his former fiancee cheated on him with his best friend right when he needed her most, and when he meets Andi, the girl next door, he's head over heels from the beginning. There are a lot of factors conspiring against them, though—their age difference, for one, which is less than 10 years but which Hill thinks is too large, not to mention their shared reluctance to get involved too seriously. While they decide to take things one day at a time, it turns out that there are deeper emotions at play, and both Andi and Hill will need to come to grips with the fact that a fun, friendly arrangement that may have started out as casual might be more serious than they had planned for. Loren has an enduring ability to navigate heavier subjects within an engrossing love story, and although a subplot involving an internet stalker climaxes in a manner that feels somewhat out of step with the rest of the book, the themes of PTSD and anxiety, as well as the hero's disability, are handled with thoughtfulness and care.

A compelling tale of two ultimately resilient people learning to let go of fear in favor of love.