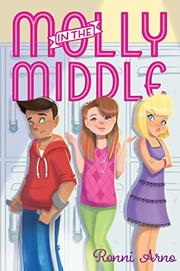 MOLLY IN THE MIDDLE

A middle child feels torn between her friends as well as her family.

Twelve-year-old, white Molly Mahoney feels invisible amid her parents’ fighting and her sisters’ acting out. Only her best friend, Kellan, a white boy who has muscular dystrophy, pays attention to her. But Kellan is home-schooled—has been for years—and Molly’s classmates don’t notice her either. After being overlooked yet again, Molly gives herself a multicolored dye job and tries on a smart-alecky attitude. Her parents are unfazed, but the popular girls—Asian-American Nina and white, affluent Christina—take note. Desperate for an invitation to Christina’s over-the-top Birthday Bash Brunch, Molly avoids Kellan—which becomes harder to do when Kellan returns to school. Worse, Christina’s party and Kellan’s Muscular Dystrophy Walk are on the same day, and she must choose between them. Heavy-handed characterization makes her ultimate choice predictable. Christina, a one-dimensional mean girl, offers little incentive for friendship; her lack of redeeming traits oversimplifies the tough dilemmas of popularity and peer pressure. Readers may also wonder why Molly befriended Kellan. Her narration often frames him as an object of pity; his MD is his most prominent characteristic, and Molly doesn’t seem to care about his few interests. Molly’s relationship with her sisters, strained and strengthened by their parents’ friction, is much more nuanced.

Though Arno’s portrayal of rocky family relationships is perceptive, her treatment of middle school friendship is disappointingly simplistic.