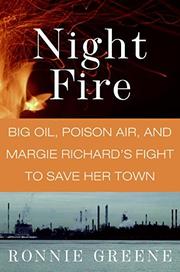 Big Oil, Poison Air, and Margie Richard’s Fight to Save Her Town

Drawing on extensive interviews, newspaper articles, court documents and other public records, the author chronicles the difficulties encountered by Margie Richard, a schoolteacher and community leader, when she took on the giant multinational corporation that threatened the health and safety of her neighborhood. Diamond, a four-block African-American area in Norco, La., was located just outside the fence of a Shell chemical plant, across town from a Shell refinery where many of Norco’s white residents were employed. After deadly explosions and pollution-based illnesses took their toll on her family and neighbors, Richard launched a grassroots campaign in 1989 that sought relocation payments from Shell so that Diamond residents could move away from the hazardous plant. Later, the strategy changed to a suit for damages known as Richards v. Shell, opposed by many local whites whose livelihood depended on Shell. Richard’s group lost the case at trial in 1997, but over the years she had become a knowledgeable, skilled and well-connected environmental activist. In 1999 she addressed the UN Commission on Human Rights in Geneva, and in 2000 she carried a bag of polluted air from Norco to a UN Conference on Climate Change at the Hague, where she presented it to a Shell executive. The resulting publicity, not just in print but on the Internet and on television, put new pressure on Shell. Greene provides a lively, readable account of how this pressure grew and the various ways that Shell responded. In 2002, shortly before the airing of a PBS documentary about the struggle, the corporation offered to buy all the houses in Diamond, enabling Richard and her neighbors to relocate.

A personality-rich narrative of one community’s successful fight against a polluter, as well as a vade mecum for other towns facing similar problems.