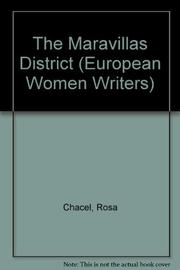 A first novel in an autobiographical trilogy, by Spanish writer-artist Chacel (b. 1898—), perceptively detailing the rites of passage of two young women artists. Set in pre-WW I Madrid, where the author grew up, the story reflects a time of change—of life on the cusp as young women for the first time consider independent lives for themselves in the promising century ahead. Beginning when Isabel and Elena, who live in the same apartment house, are 11 and 13, respectively, Chacel charts—in often elliptical, dense prose—their growing sense of themselves and their developing sexuality. Both vividly realized characters, Isabel is the daughter of an unmarried seamstress, and Elena lives with her grandmother, the widow of a famous maestro; her mother, Ariadne, a singer destined for greatness but now reduced to giving singing lessons; and her father, a proud sometime poet. As the girls observe changes in themselves and in the neighborhood—a frivolous woman marries a rich man; a widower and his son engage in political activities; and the pharmacist's son is smitten with Isabel—they're also discovering art. And when a young man suggests, as they contemplate applying to an elite art-academy, that they face the conflict between gender and vocation—that they might have to ``cut off inside your heads whatever hinders your freedom of movement, submitting to necessity, being different people''—the two girls, now young women, resolve to ``figure it out, find out how much of it is true.'' A rich lode of insights and epigrams, to be mined from challenging prose, that celebrates the cerebral rather than the diurnal. An easy read not—but well worth the effort.