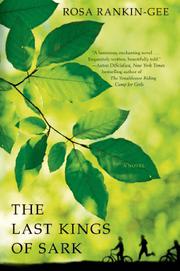 THE LAST KINGS OF SARK

The past and present join together in a tale of a summer love that weaves its tendrils around three young hearts and still grows there decades later.

It’s the summer before 16-year-old Pip goes to university, and his father has hired two girls to spend July and August at their home on Sark—a British Channel island off the coast of Normandy. Twenty-one-year-old Jude arrives to tutor Pip; Sofi, 19, becomes the family’s cook. Pip’s ailing mother seldom ventures downstairs, so when Pip’s father is away on business, the three free themselves from responsibilities and explore the island and grow close. Summer drifts by and ends in a confused tangle—“a hot, melted knot”—the day before Jude flies home. Thus ends the first 29 chapters, originally written as a novella for which Rankin-Gee received the Shakespeare and Co. prize (2011); they reveal her ability to create vital characters and paint wonderfully with words. The three young people are well-drawn, and the dialogue is fresh and vibrant, but the story lacks a strong plot; it's a cerebral tale made up of Jude’s thoughts and sharp observations but one that lacks forward momentum. Later, Rankin-Gee added additional chapters, giving readers a peek into the subsequent lives of Jude, Sofi and Pip, each still affected by their long-ago summer on Sark. Alternating chapters narrated by each of the three characters serve to address the unasked question at the end of the first half of the novel: “So who loved whom, exactly?” But there's an odd sense of disjointedness: Answers are hinted at, alluded to, leaving the reader to make leaps; and though the final chapters provide some closure, they raise as many questions as they answer…which isn’t necessarily a bad thing.

Readers who enjoy a slower-paced novel will find this character-driven tale interesting and thought-provoking.