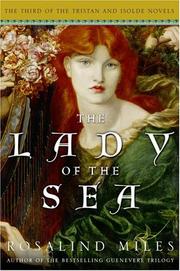 THE LADY OF THE SEA

The Third of the Tristan and Isolde Novels

True love contends with treachery in high places in this last of a trilogy (Isolde, 2002, etc.) about the fraught lives of Tristan, noble knight, and Isolde, Queen of Ireland.

Miles, who gives old legends a feminist spin, now makes Isolde a champion of female freedom and leadership: a champion who must not only defeat an invasion by painted men, the notorious Picts, but also by malignant Christian priests who want to destroy the religion of the mother goddess, who preaches kindness, love and the right of women to choose their men. Married to King Mark of Cornwall, a vassal of the great Queen Igraine, Isolde now wants to end the marriage and marry Tristan. But Tristan has sworn allegiance as Mark’s knight, and feels obliged to return to the Cornish court. Hearing rumors of a possible Pict invasion, Isolde hurries home to Dublin, only to learn that the Picts have landed and are marching on her capital. While she contends with the Picts and an unsettling attraction to their leader, the handsome Darath, who wants her as his queen, Tristan also has battles to fight. He defeats a deranged knight in the woods, escapes the demands of a sinister lady, and then decides it’s better to be with Isolde, who loves him, than serving unappreciative Mark. But the two lovers face more misunderstanding, dangers, and betrayals as ambitious knights scheme for Mark’s throne. Priests not only want Mark to renounce Isolde but limit her power, and a jealous Mark turns against Tristan. Back in Cornwall to look for the missing Tristan, Isolde collapses when Mark first shows her what she assumes is Tristan’s body, then imprisons her with a group of lepers. But the two lovers aren’t alone, as Merlin and the powerful Lady of the Sea make sure that these followers of the old ways escape destruction.

As always from Desai: an intelligent and freshly tooled retelling of an old story.