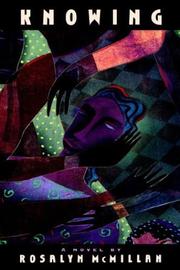 A first novel explores the lives and loves of middle-class African-Americans, but pales in comparison to Terry McMillan's (no relation) widely acclaimed Waiting to Exhale. At center stage here are two intelligent, attractive women, Ginger Montgomery and her cousin, Kim Lee. On the surface Ginger appears to have it all: comfortable income, stunning home, four beautiful children, and terrific sex with Jackson, her second husband and the father of her youngest child. But Jackson refuses to let her pursue her longtime career dream of becoming a real estate agent, insists that she work at a tedious factory job beneath her intellect and skill levels, and denies that their inability to relate outside the bedroom is affecting the lives of their entire family. To make matters worse, Ginger's mother, Katherine, is drinking too much and sleeping with a man 20 years her junior; Jackson's cousin-in-law, Mae Thelma, has her eye on Jackson; and two of the kids are having trouble in school. Meantime, cousin Kim has problems of a different kind: Bill, the man she loves, won't ask her to marry him; her father has recently suffered a severe stroke; and her mother (Ginger's aunt) dies of complications from the stress. Eventually Kim buckles under her burdens and winds up in the hospital instead of at the altar, and it takes heart-wrenching confessions on her part and Bill's to bring the two to an understanding. Together and alone, then, Ginger and Kim struggle to come to terms with their sexuality, their independence, their ``men,'' and each other; regrettably, the heavy-handed sex scenes and overdoses of references to pop culture drag down what at times is an engaging, vividly rendered story. Despite its undeniable momentum, a rough-around-the-edges debut. If Waiting to Exhale is a masterpiece, this McMillan is a mass-market reproduction. (Author tour)