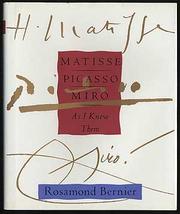 MATISSE, PICASSO, MIRO AS I KNEW THEM

Bernier's first book is a reshaping of her slide and lecture series often given at the Metropolitan Museum of Art and elsewhere. The author, wife of art critic John Russell and founding editor of L'OEil, writes splendidly of her three artists on a personal level and covers a lot of ground artistically without ever getting in very deep or stopping for a rich examination of the works at hand. She always charms, however, especially when revealing lost treasures that she discovered firsthand. (The book's 350 illustrations, including 200 color, seen largely in b&w photocopy, give every indication of being knockouts.) Despite moments of evident warmth the artists showed her, Bernier's day-to- day reminiscences of her three heroes reinforce what we already know of them, and at times bring these men popping off the page with a line or two of dialogue without offering fresh insight into their work. Her stories cover the first 20 years in France following WW II, when her magazine was at its peak (it changed hands in 1969) and when, through her ``genius for friendship'' (as her husband puts it), she was gathering fresh material for L'OEil. Perhaps her biggest strike was a big cache of Picasso works the painter had left with his family in Barcelona 50 years earlier and that he directed her tomany were black with grime but when cleaned revealed the teenage artist's astounding facility as a realist. Bernier's most captivating passage about Matisse concerns the bedridden artist's slowly evolving plans and inspiration for the Chapelle de Sainte-Marie-du-Rosaire at Vence and the sudden impetus to his work that thoughts of stained-glass windows in strong sunlight gave him. Mir¢ tells her about his painting of The Farm, which turned out to be too big for any dealer to sell; the young Hemingway bought it ``for pennies, but he liked it a lot.'' A moveable feast. Clear off the coffee table.*justify no*