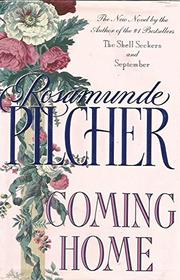 Mega-selling Pilcher's very, very long WW II soap: the hardships of the Duration are never far from a restoring cup of China tea and a silver tray of iced cakes. It's 1936 when Pilcher's (September, 1990, etc.) sensible, selfless heroine Judith Dunbara true English roseis separated from her family: Her mother and sister go off to Ceylon to join her father, and Judith, 14, is sent to St. Ursula's girls' school in Cornwall. There, she befriends the rich, madcap Loveday Carey-Lewis and is quickly adopted by her glamorous, likable family. Though Judith is supposed to spend her holidays with her golf-playing Aunt Louise, she quickly finds a happier home at Nancherrow, the Carey- Lewises' luxurious estate on the Cornish coast. Cushioned by cashmere and fine Shetland, befriended by Nettlebed the butler and Mrs. Nettlebed the cook, advised by the Carey Lewises' wise nanny Mary Millywaya veritable Disney film of charming support staffJudith copes with growing up ``alone.'' When Aunt Louise dies in a car crash, though, Judith comes into a considerable fortune of her ownone that enables her to buy the home she, too, has always craved. Finally, after a lot of long walks and Cornish cream teas, WW II begins, and the beautiful young men who decorated the lawns of Nancherrow are wounded, taken prisoner, or killed. Judith, mourning the death of Edward Carey-Lewis, joins the Wrens, the Women's Royal Navy Service. In the service, she has a passionate one-nighter with a Cornish doctor who's not only sensible but knows how to cook a good steak. Though the letter in which he'll later declare his lifelong devotion never reaches Judith, a typical wartime happy ending is ensured. Homily-laden escapist fare with drama that's never as good as the gardening. Flowers are everywhere, even decorating the pages, in Pilcher's sylvan valentine to prewar Cornwall. (First printing of 850,000; $800,000 ad/promo; Literary Guild main selection)