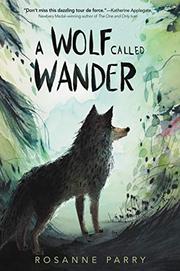 Separated from his pack, Swift, a young wolf, embarks on a perilous search for a new home.

Swift’s mother impresses on him early that his “pack belongs to the mountains and the mountains belong to the pack.” His father teaches him to hunt elk, avoid skunks and porcupines, revere the life that gives them life, and “carry on” when their pack is devastated in an attack by enemy wolves. Alone and grieving, Swift reluctantly leaves his mountain home. Crossing into unfamiliar territory, he’s injured and nearly dies, but the need to run, hunt, and live drives him on. Following a routine of “walk-trot-eat-rest,” Swift traverses prairies, canyons, and deserts, encountering men with rifles, hunger, thirst, highways, wild horses, a cougar, and a forest fire. Never imagining the “world could be so big or that I could be so alone in it,” Swift renames himself Wander as he reaches new mountains and finds a new home. Rife with details of the myriad scents, sounds, tastes, touches, and sights in Swift/Wander’s primal existence, the immediacy of his intimate, first-person, present-tense narration proves deeply moving, especially his longing for companionship. Realistic black-and-white illustrations trace key events in this unique survival story, and extensive backmatter fills in further factual information about wolves and their habitat.

A sympathetic, compelling introduction to wolves from the perspective of one wolf and his memorable journey.