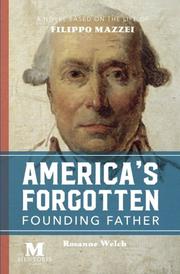 A Novel Based on the Life of Filippo Mazzei

Welch’s (Why the Monkees Matter, 2016, etc.) historical novel pays tribute to the real-life Filippo Mazzei, an Italian surgeon, merchant, revolutionary, and writer who was friends with Benjamin Franklin and Thomas Jefferson.

Mazzei is born on Christmas Day, 1730, in the small Tuscan town of Poggio a Caiano, the third son of a mother whose love and devotion were reserved for her firstborn, Jacopo. Fortunately, Mazzei’s paternal grandfather is a kind, generous role model through his first seven years. And the sting of his mother’s favoritism for Jacopo, a manipulative thief, serves Mazzei well, propelling him into a life of adventure and accomplishment: “I will spend the rest of my life proving you have given all your love to the wrong son,” he tells his mother. He studies medicine in Florence, then moves to the port city of Livorno to practice. Even as a child, he’d begun questioning the injustices in life, but in Livorno, he begins interacting with a wide circle of intellectuals with whom he debates history and philosophy. Eventually, he moves to London and opens a shop in 1764, establishing himself as a successful importer. More critically, he meets Benjamin Franklin; it’s a connection that leads to Mazzei’s 1773 voyage to the American Colonies, where he builds his new home adjacent to that of Thomas Jefferson—just in time for the American Revolution. Welch’s volume rests somewhere between novel and biography, lacking the dramatic passion of the former and the cited source material of the latter. Still, she offers an unusual, if at times hagiographic, portrait of a man whose importance to the founding of the United States has indeed been generally overlooked. Most intriguing are the sections detailing Mazzei’s close friendship with Jefferson, which led the two to work together on the text of the Declaration of Independence. Their wide-ranging conversations, as depicted by Welch, reveal as much about Jefferson as they do about Mazzei; they include the latter’s long-held belief in equality and justice as well as their shared interests in agriculture, architecture, language, and religion.

A biographical novel with an overly reverential tone but filled with intriguing historical tidbits.