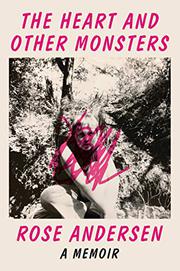 THE HEART AND OTHER MONSTERS

An essayist looks back on her life and the circumstances surrounding her sister’s alleged overdose at age 24.

“I know what I am doing,” writes Andersen in the final third of the book. “I am curating her life. I take your hand and lead you through the blood and bile this story is made of….The unbearable note of grief still sings in my head. The melody of which you will never hear.” In a note to readers on the first page, we learn that the author suspects her sister, Sarah, was murdered, although she has no proof. Then Andersen leaves that idea behind, imagining her sister’s death as an accidental overdose, which is what both the police and the author believed when Sarah’s body was found locked in the bathroom of her boyfriend’s home, her dog wailing outside the door. As Andersen describes dealing with the logistics of the death and coping with her initial experiences of loss, she revisits her childhood, her troubled parents and stepfamilies, and her experience with cancer as a teen. Her own dark interlude with drugs and alcohol in her early 20s—“My worst lies happened when I was drinking and using coke…social lies, omissions, white lies, gray lies, kind lies, terrible lies”—eventually gave way to lasting sobriety through AA. The family story unfolds in brief, elegiac chapters illustrated with black-and-white snapshots. Gradually, Andersen begins to change the narrative, slipping in news stories about a seemingly unrelated murder, which, by the end, she has causally connected to her sister’s death. The revised facts are presented in a report made to the police, included near the end of the book. Combining the agonizing emotional intensity typical of narratives about losing a sibling with the memoiristic style of a murder investigation successfully complicates the reading experience.