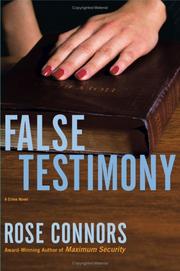 Remember Chandra Levy, the vanished congressional intern who was knocked off the front pages by 9/11? Connors does, and she’s fictionalized her to provide half of Cape Cod attorney Marty Nickerson’s latest round of legal intrigue.

Rumor has it that Sen. Charles Kendrick (D–Mass.) is planning a run for the presidency. But when his favorite staffer and spokesperson, Michelle Forrester, 25, goes missing, the rumors turn uglier. Was he romantically involved with the young woman? Did his wife and neighbors know anything about their liaison that Barnstable County District Attorney Geraldine Schilling could use against him? Will he take the advice Marty gives him when he calls her for advice and shut up instead of rushing to give the authorities statements that might be used against him? The answer to that last question, of course, is no, and soon enough the senator is facing a charge for murder. By the time he’s arraigned, however, Marty and Harry Madigan, her partner and lover, will already have gone 15 rounds with the world’s worst defendant: Derrick Holliston, who’s accused of stabbing Father Frank McMahon eight times and taking off with the Christmas Eve collection. Holliston’s defense: When he went to the rectory looking for work, Father McMahon, 57, came on to him and wouldn’t take no for an answer. Marty, who’s had lots of experience working with clients she doesn’t trust (Maximum Security, 2004, etc.), mostly sits by while Harry does his best to rescue Holliston from himself. It’s not pretty, but it’s pretty funny, especially when the client works out a clever way of telling his story in court without opening himself to cross-examination.

Neither case offers much in the way of surprises, and Kendrick’s troubles end up getting elbowed aside. Page for page, though, Connors continues to be one of the most entertaining writers on the courthouse circuit.