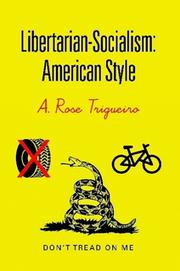 American Style
by A. Rose Trigueiro
GET WEEKLY BOOK RECOMMENDATIONS:

A writer attempts to find pragmatic solutions to problems of American political policy by forging a compromise between libertarian and socialistic theories.

According to debut author Trigueiro, the United States is trapped in a tug of war between dogmatic ideologies, with each side laying claim to a superior patriotism. The way out of this partisan quagmire is to craft a compromise between libertarian and socialist perspectives “heavily rooted in common sense.” In fact, the author contends that libertarian-socialism, the hybrid theory Trigueiro recommends, is consistent with “the original vision of America’s founding fathers.” The author surveys an ambitious stretch of intellectual ground, covering diverse topics like Social Security and health reform, climate change, the electoral system, transportation, and irrigation, an impressively diverse list. Some of her discussions and proposed solutions are lucidly articulated and eminently sensible; for example, she suggests an expansion of the House of Representatives, which would accomplish, among other things, improved democratic representation and might stymie endless partisan gerrymandering. The author also tackles the burgeoning student loan crisis by outlining a “national service initiative” tied to the forgiveness of college tuition. Trigueiro truly does seem to hunt for ideologically unencumbered solutions to real problems, keenly avoiding ones that ignore either the demands of a communal society or the moral significance of individual liberty. In fact, the author is at her best limning the nation’s “complex relationship with socialism,” and the many ways in which its concrete applications, like Social Security, are already woven into the country’s civic fabric. But she covers far too much ground within a brief study, and as a result, her quickly developed contentions are more stridently declared than rigorously argued. Trigueiro’s tendency, in the search for common sense, is to reductively oversimplify the issues. For example, a value-added tax, whatever its merits, is surely not “almost guaranteed to succeed at righting America’s financial ship.” And she never provides a searching discussion of the fundamental elements of either libertarianism or socialism—a glaring inadequacy of the study. Still, the author deftly demonstrates that a spirit of open-minded compromise is insufficient; one needs a meticulous and thorough examination of the issues as well.