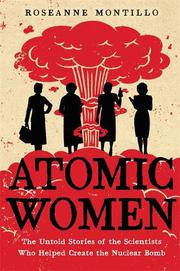 Intertwining stories of the often ignored female scientists whose research led to the creation of the atomic bomb.

Montillo begins with Marie Curie, the one female physicist most people can name. After identifying, isolating, and purifying the first known radioactive elements—radium and polonium—she and her husband, Pierre, shared the 1903 Nobel Prize in physics. Readers may not be aware that fellow French scientists conspired to keep her name off the award, believing incorrectly that she only assisted Pierre. Their daughter, Irène Joliot-Curie, would also win a Nobel Prize for her work with radioactive elements. Austrian Jew Lise Meitner fled to Stockholm to escape the Nazis, where she did mathematical work proving the possibility of nuclear fission. As World War II progressed, America began to explore the possibility of weaponizing nuclear energy, and the Manhattan Project began. American physicist Leona Woods helped perform the first nuclear chain reaction while Joan Hinton built elements of the first nuclear reactor. Montillo tells their stories—along with those of many other women—in this comprehensive work. The narrative bounces back and forth in time, sometimes in ways that may confuse readers, and, unfortunately, it ends with the nuclear bombs falling on Hiroshima and Nagasaki—it would have been nice to read something about what these women achieved afterward. Still, the book is lively, well-researched, and comprehensible.

A useful work of scientific history.